The Preakness Stakes is coming up on Saturday, May 15, 2021. The second jewel of the American Triple Crown drew a field of 10 top three-year-olds. Find out the top contenders in the race, and learn the best places to place your bets!

Maryland’s biggest race is coming up on Saturday, May 18 at Pimlico Race Course in Baltimore: the 2021 Preakness Stakes! The race covers 1 3/16 miles on the dirt, and it drew a field of 10 of the best three-year-old horses in the country. It is one of the best betting opportunities of the year, and this is the place to learn who to bet and where to bet!

Due to his Kentucky Derby post-race test coming back positive, he will not be allowed to run in the Preakness unless he passes a pre-race test. But, if Medina Spirit is allowed to run, he is a serious Preakness contender. Bob Baffert has won a record seven editions of the Preakness Stakes, and he has never run worse than second with a Derby winner.

Medina Spirit is a frontrunning horse, and he is uncommonly game when challenged. That ability should serve him well, as there are a couple of other speed horses in the race who are likely to challenge him. His #3 post is also a good draw; the inside gates are succeeding at Pimlico this meet.

He is Medina Spirit’s stablemate in the Bob Baffert barn, and will also be allowed to run pending a pre-race drug test coming back negative. If he runs he will also be part of the speed brigade. However, at such a short price, it is a concern that he could not see out the trip in a weaker-than-usual Arkansas Derby. He looks like a serious underlay.

Usually part of the speed, Midnight Bourbon started poorly in the Kentucky Derby. Still, he proved to be the same hard-trying, consistent horse he always is, overcoming that issue and rallying for sixth. A better break should get him a good forward trip for strong Preakness trainer Steve Asmussen, and he is one of the real contenders in the 2021 Preakness.

Trainer Chad Brown has a pair in here, and Crowded Trade is the more interesting. His tactical versatility should help him work out a trip. And, though he cedes experience to most of his foes, he fits the same profile as Brown’s previous Preakness winner Cloud Computing: a later-blooming horse who got some shares in Derby preps in New York.

Rombauer comes in from a third-place finish behind the top-class Essential Quality in the Blue Grass. In that race he sat closer to the pace than he ever had before, a positive sign given how well tactical speed plays in the Preakness. Given that trainer Michael McCarthy is so sharp with shippers, Rombauer deserves respect at a square price. 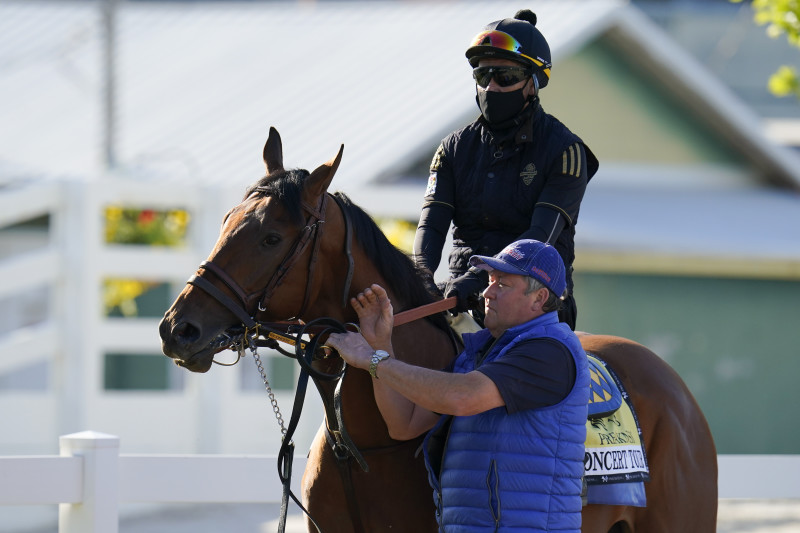 The deck is stacked against Keepmeinmind in the Preakness. He passed a few to finish seventh in the Kentucky Derby, which was better than most were expecting after poor efforts in the Blue Grass and the Rebel. But even if his Derby suggests he trained on at three after all, truly deep closers do not tend to do well in the Preakness.

He rallied for a good second behind King Fury in the Lexington, a good step forward from his belated fourth in the Tampa Bay Derby. He is an improving, later-blooming type for Todd Pletcher. The question is his running style, as he does tend to rally from far off the pace. However, if you’re playing trifectas and superfectas, he makes good sense underneath.

The second entry from the Chad Brown barn, Risk Taking won the Withers with confidence but has to bounce back from a complete no-show effort as the favorite in the Wood. He drew a relatively outside gate, which may make it tough for him to carve out a great  trip, and off such a poor race in the Wood there are questions as to whether he is good enough for this.

This Japanese-trained horse was most recently a well-beaten sixth in the UAE Derby. He does have a pair of wins in Japan. His forward running style is a positive at Pimlico, though it is questionable whether he will have the same kind of early speed as Medina Spirit, Concert Tour, or Midnight Bourbon — especially since he is such a poor gate horse.

Six-time Preakness winner D. Wayne Lukas is never afraid to take a shot, and that is exactly what he is doing with Ram. It took him eight starts to break his maiden, but Ram has won his last two. The good news is, Ram drew the rail and the rail has been golden at Pimlico this meet. But, he has yet to run a race anywhere near fast enough to contend in this race.

Latest Odds for the Preakness Stakes

Preakness odds will keep changing between now and the day of the big race. So, make an account at one or more of the online racebooks listed below, keep an eye on the odds, and get your wager in for the 2021 Preakness Stakes.

After all the drama of the Kentucky Derby at Churchill Downs, the racing scene shifts to Pimlico Race Course in anticipation of the running of the 2019 Preakness Stakes. A couple of the high-profile contenders from the Derby are expected in the field, as well as a number of new shooters that add to the handicapping puzzle and could provide good betting value.

The field has been established for the 2016 running of the Belmont Stakes and of the thirteen contenders, there are four horses who competed in the Preakness Stakes (G1) and are moving on to the third jewel of the Triple Crown.

Wise guys who liked Stradivari in the Preakness have every right to maintain their enthusiasm for the Todd Pletcher-trained colt in the Belmont Stakes where the intriguing runner will likely make his next start.

The 2016 edition of the Preakness Stakes is in the record books and horse racing fans will have to go another year without a Triple Crown on the line. Exaggerator was able to defeat his rival and step into the spotlight with a victory at Pimlico Race Course.

Check out our recommended sites

The Preakness Stakes is coming up on Saturday, May 15, 2021. The second jewel of the American Triple Crown drew a field of 10 top three-year-olds. Find out the top contenders in the race, and learn the best places to...